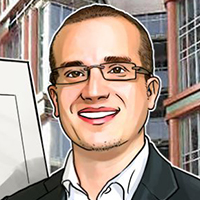 Simon Dixon is the CEO and co-founder of the online investment platform BnkToTheFuture.com, which is focused on investments in fintech companies and the cryptocurrency industry. Simon is also the ex-director of UK Digital Currency Association and UK CrowdFunding Association. After working as an investment banker, Simon Dixon invested in Bitcoin and then supported various influential blockchain projects, some of which are stable and have large market capitalizations to this day. Simon regularly appears for interviews in financial media and at Bitcoin conferences. BnkToTheFuture.com currently has more than $325,041,131 invested through it and gained positive reviews from Sir Richard Branson and other influential figures. It is considered to be the largest online investment platform and is well known for its transparency and bank-grade security.
Editörün seçtikleri
Cointelegraph YouTube Abone Ol
Reklam